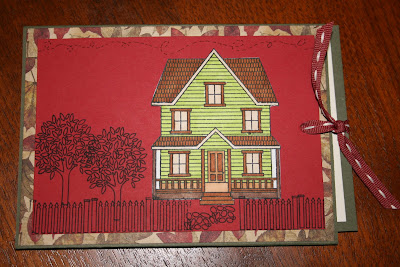 I made this card a while back. I was testing out a fold that I wanted to try for a swap I joined, hosted by the wonderful Paola (SAMA on SCS).

For this card, i used a ribbon slide so that the card slides in and out of its "holder". The original tutorial called for a different size, but I tweaked it just a tad so that its closer to A2 size, with a bit of the inside card sticking out, so the recipient has an idea they should pull it.

I used a PTI set - Boards & Beams, which i JUST HAD to have after I saw a card made by the VERY talented Sandra. Her blog, appropriately named Paper Funtastics! 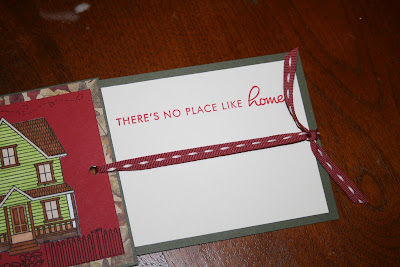 I used copics to color up theimage, SU! cardstock and ribbon, K&Co PP & cut out the house image and glued onto the base.

I also have a little holiday cheer for you - see the sidebar for a little puppy love.... that's our little ROCKSTAR!
Posted by karen at 5:43 PM

Oooo, Karen, this is fabulous! I love how your beautifully colored house just pops. And this layout is just great, one to definitely try! {HUG}

What a cool card! A slider - another thing I have yet to try! Thanks for the push - LOL...

This is the neatest ever! I know the swappers were bananas crazy to receive this! Fantastic card :)

Hey Karen!
I don't know how I missed this in my sidebar, but I'm here now, and whoa, Nellie! This is fabb-O! That slider technique is awesome, and I love that Boards and Beams set too! GREAT CARD!!

OOOOOH I LOVE it!! What a great scene and that slider is awesome! I have to try it now!

OMG! This is freakin' awesome!!! I love how you did the red background and only made the house in color. That is so cool. Fabulous coloring too.

woot woot woot...can't wait to receive this card! wowwwuzer! and I'm the lucky gal who gets to keep one too!...what a beauty it is Karen and I'm in love with all the rich colors U used and the awesome tecnique!...In some many ways it reminds me when U and I put together a scene for Trevor's Halloween card....this makes me think of the few precious hrs we spent together my friend,therefore this card is even more special to me. *tfs* *muwahhh*